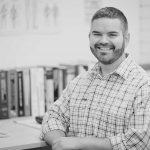 Luke gained a Bachelor of Chiropractic Science in 2005 and a Master of Chiropractic Science in 2007, both from Macquarie University in Sydney. Following this, he worked as a chiropractor at Tyack Health, a large multidisciplinary health clinic in the bayside suburb of Manly in Brisbane. This experience gave him the opportunity to work with and learn from a range of health practitioners including chiropractors, osteopaths, doctors, physiotherapists, naturopaths, massage therapists, and Chinese medicine practitioners.

Prior to undertaking his chiropractic studies, Luke had many years of care by chiropractors practicing the Kjellberg method of chiropractic. This method was developed in Australia in the first half of the 20th century by Ernst Kjellberg, a Swedish born migrant who established live-in clinics in far north Queensland in order to treat polio patients and those with chronic ailments.

Luke’s treatment style has been formed by these experiences.

At the Armidale Chiropractic Clinic, we treat a wide range of musculoskeletal complaints and injuries including:

Treatments can vary depending on your specific complaint or injury, however, our first priority is getting you out of pain and giving you strategies to reduce or avoid the recurrence of your complaints.